During exposing to the sun, we often protect our skin by applying sunblock, but we might forget that the eyes need sun protection as well. Despite the fact that eyes only account for 2% of total body surface area, UV radiation from natural sunlight can drastically damage the eye’s surface tissues as well as main components e.g. the cornea and lens. The structures and functions of the eyes are complex. The eyes are naturally protected by the orbit –the bony cavity that contains the eyeball, muscles, nerves and blood vessels. Eyelids, eyebrows and eye lashes also act as eye protective layers. In addition, constriction response or the narrowing of the pupil, eye closure and eye squinting are naturally protective mechanisms when the eyes are irritated by visible light. Nonetheless, these mechanisms are not activated by invisible UV radiation. On a day without bright sunlight, the body is still exposed to a large amount of UV radiation, therefore UV radiation does not stimulate the natural defenses of the eyes.

UVC is the most powerful ray. It is the most damaging to the skin and eyes. Normally, the majority of UVC is absorbed by the ozone layer in the atmosphere. However, the recent ozone depletion in the atmosphere allows more harmful UVC penetration into the earth, causing health–related conditions.

Compared to UVC, UVB has a lower energy. It is mostly absorbed by the ozone layer, but some does reach the earth’s surface. UVB affects the epidermis (outer layer of the skin) and increases the melanin production. This results in skin damages e.g. sunburn, blistering, dark spots and wrinkles as well as an increased risk of skin cancer. In relation to the eyes, UVB affects the corneas, causing eye problems, such as severe irritation and light sensitivity.

Although UVA with longer wavelengths is less powerful than UVC and UVB, UVA is the one that largely penetrates the eyes through the lens and retina. Excessive exposure to UVA has been associated with the developing of cataract.  There is clinical evidence revealing that UVA is one of the potential risk factors that contribute to macular degeneration described as a blurred or no vision in the center of the visual field.

Eye damage from the sun

Long–term exposure to the sun causes damages to the eyes. Damages caused by UV radiation can affect different parts, including:

Blue light and the eyes

Blue light is a range of the high–energy visible light spectrum, defined as having a wavelength between 381−500 nm. which is close to the UV light. Owning to blue light has considerably short wavelengths, it produces a higher amount of energy. Blue light penetrates deeply to cells and causes permanent cell damages.  Prolonged exposure to blue light may cause retinal damage and contribute to age-related macular degeneration, which can lead to central loss of vision. Clinical studies strongly indicate that too much exposure to blue light can profoundly damage light–sensitive cells in the retina, eventually leading to permanent central vision loss.

According to an European study published in the October 2008 issue of Archives of Ophthalmology, people who have low blood plasma levels of vitamin C and other antioxidant substances have a greater risk to develop macular degeneration due to accumulative effects of exposure to blue light.

Blue light is everywhere. Manmade sources of blue light include the display screens of computers,  flat–screen televisions, fluorescent and LED lighting, smartphones and other digital devices as well as laser and certain medical devices. While the cornea and lens of the eye are effective at blocking UV rays from reaching retina, almost all visible blue light passes through these natural barriers. It could reach and damage the delicate retina. The blue light blocking lenses are usually a pale orange or yellow tint. These lenses acting as blue blockers have filters in their lenses that block or absorb blue light from getting through. Since blue light has wavelengths close to UV radiation, blue light blocking lenses can help filtering UV light as well. 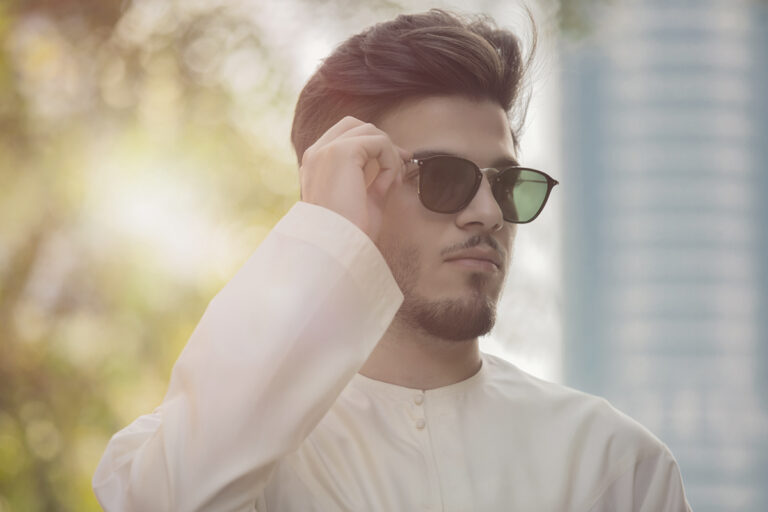 Excess exposure to UV light raises risks of eye diseases. It is important to start wearing proper eye protection at an early age to shield the eyes from years of ultraviolet exposure.