Uterine fibroids can be the major causes of infertility

A large amount of couples has experienced infertility problems. The number of infertile individuals has increased over the past years. Both male and female factors mainly contribute to infertility. Particularly in women, several different factors play a major role in affecting ability to get pregnant and deliver a healthy baby. These include ovulation disorders, fallopian tube damage or blockage and pelvic adhesion as well as endometriosis defined as an abnormal growth of endometrial tissue that grows outside of the uterus. More importantly, one of the main causes of female infertility is uterine fibroids which are characterized by noncancerous (benign) growths of the uterus. Uterine fibroids can potentially cause infertility by blocking the fallopian tubes or stopping a fertilized egg from implanting in the uterus. In addition, large fibroids may prevent a fetus from growing fully due to decreased space in the uterus. Fibroids can result in increased risks of placental abruption due to placenta breaks away from the uterine wall since it is blocked by fibroids. This leads to reduced vital oxygen and nutrients to supply the fetus. As a consequence, chances of preterm birth or miscarriage significantly rise.  Uterine fibroids induce anatomical changes in the uterus, thus pelvic examination and imaging tests e.g. abdominal ultrasound and vaginal ultrasound largely help to identify irregularities in the shape of uterus, allowing uterine fibroids to be detected at early stage. Not only to shrink or eliminate fibroids, appropriate and timely treatments greatly help to increase chances of pregnancy in women who have faced infertile problems primarily caused by uterine fibroids.

Get to know uterine fibroids

Uterine fibroids, also called uterine myomas are benign smooth muscle tumors of the uterus. These noncancerous growths of the uterus often appear during childbearing years. Fibroids range in size from undetectable seedlings to bulky masses that can distort and enlarge the uterus. Women might have a single fibroid or multiple ones. Locations of fibroids vary among individuals. In addition, fibroids can change both the size and shape of the uterus and affect the cervix. Symptoms and complications depend on size and location of fibroids.

Types of uterine fibroids are classified according to their locations. There are four primary types of fibroids including:

Uterine fibroids can induce abnormal changes of the uterine including high estrogen levels, uterine contraction and ovulation dysfunction. More importantly, fibroids can lead to impaired fertility due to the blockage of the fallopian tubes and stopping a fertilized egg from implanting in the uterus. If uterine fibroids develop, risks of pregnancy complications including premature delivery and miscarriage potentially increase.

To diagnose uterine fibroids, tests mainly involve pelvic exam, lab tests and imaging tests. Imaging tests are used to visualize the abnormalities of the uterus. These include abdominal ultrasound, vaginal ultrasound and hysteroscopy. During conducting hysteroscopy, a small, lighted telescope called a hysteroscope is inserted through the cervix into the uterus. After the injection of saline into the uterus, uterine cavity will be expanded, allowing the gynecologist to examine the walls of the uterus and the openings of the fallopian tubes. In some cases, other imaging tools such as MRI might be further required. 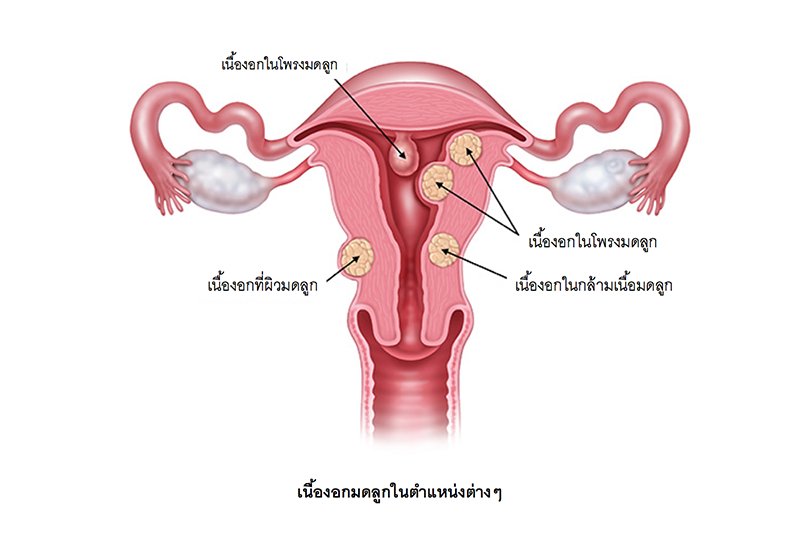 Some women who have fibroids do not experience any symptoms. In those that do, symptoms can be influenced by the location, size and number of fibroids. The most common signs and symptoms of uterine fibroids include:

Uterine fibroids usually are not serious condition. However, if they locate in certain locations or continue to grow and become bigger, they may lead to a wide range of complications such as impaired fertility, severe pelvic pain and heavy bleeding which eventually causes anemia. Particularly in pregnant women, untreated fibroids might lead to:

There are 2 main treatment options to treat uterine fibroids: medications and surgery. To select the most appropriate treatment, it is entirely determined by location and size as well as presenting symptoms and individual’s conditions.

Medications for uterine fibroids target hormones that regulate menstrual cycle for treating symptoms such as heavy menstrual bleeding. However, medicines do not eliminate fibroids, but may instead shrink them. Surgeries to remove fibroids involve traditional surgical procedures and minimally invasive surgery. “Laparoscopic gynecologic surgery” is a minimally invasive procedure to safely remove uterine fibroids without having an open cut which is required in open surgery. The surgical instruments such as a laparoscope, a narrow tube with a camera are inserted via small incisions. This allows the gynecologist to clearly visualize all dimensions of gynecologic organs on a monitoring screen before having fibroids removed accurately and safely. Laparoscopic surgery with smaller incision significantly results in less pain and enhanced safety associated with fewer post-operative complications such as lower rate of infections, less blood loss and less fibrosis formation after surgery. More importantly, faster recovery time and shorter hospital stay enable patients to quickly return to their daily life and activities. After surgery, patients are recommended to take contraceptive pills at least 1 month before considering for pregnancy.

After surgery, uterine fibroids might recur due to some persistent factors. New fibroids which may or may not require further treatments can develop. Therefore pelvic examination and ultrasound are highly recommended in women who have planned to be pregnant. Gynecological examination should be conducted before ovulation period, which is normally day 12 of each menstrual cycle, counting the first day when period starts. More importantly, regular health and gynecologic check-ups remain essential, especially in women aged over 40.