Heartburn-like pain is a common symptom of gastroesophageal reflux disease (GERD), but several other conditions can cause a burning feeling in the chest including diaphragmatic hernias. Potential risk factors to develop diaphragmatic hernias include being obese which has a doubled risk of hernias and advanced age with progressive muscular weakness and increased basal intra-abdominal pressure. If hernias are left untreated, it might lead to life-threatening conditions such as strangulated hernia, necrotizing enterocolitis (severe inflammation of intestine) and sepsis. If warning signs and symptoms such as a bulge or lump and chest pain as well as heartburn (GERD-like symptom) are presented, medical attention must be sought immediately. Timely and effective treatments help to prevent serious complications and minimize risks of recurrent hernias.

Get to know diaphragmatic hernia

A diaphragm is dome-shaped, muscular and membranous structure that separates the chest and abdominal cavities. It has a small opening (hiatus) through which esophagus passes before connecting to the stomach for further digestion process. In addition, the diaphragm muscle surrounds the lower esophageal sphincter and helps to prevent gastroesophageal reflux to the chest cavity. In a diaphragmatic hernia, also known as a hiatal hernia, the opening enlarges and the upper part of the stomach bulges or pushes up through that opening and into the chest. Diaphragmatic hernias can cause heartburn, regurgitation of food or liquids into the mouth and backflow of stomach acid into the esophagus (acid reflux). If the part of the stomach is not pushed back in place, the contents of hernia might be trapped in the chest cavity, then becoming strangulated which cuts off blood supply to surrounding tissue that is trapped. Eventually, it leads to the rupture of hernias which is fatal condition that emergency surgery is required. 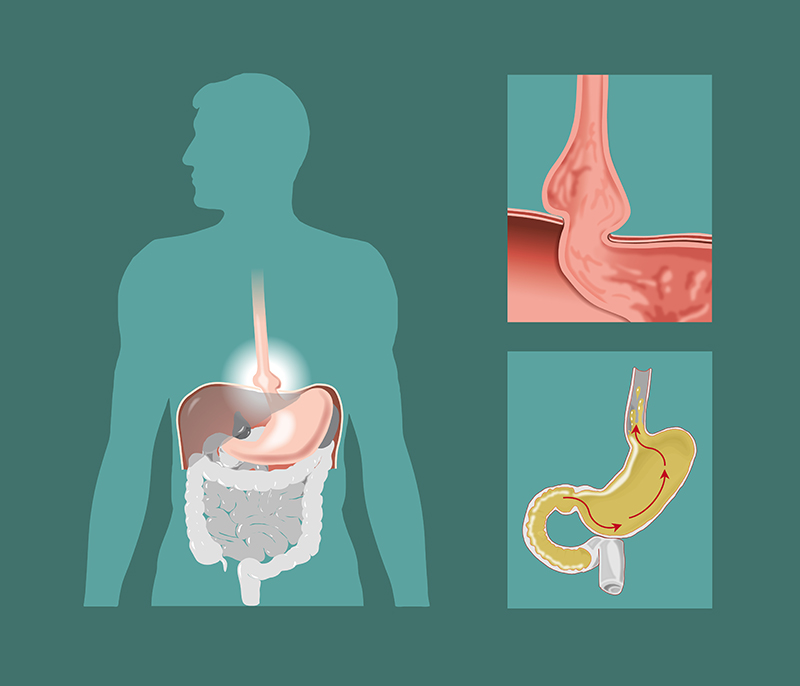 Most small or early diaphragmatic hernias cause no signs or symptoms. Diaphragmatic hernias are often discovered during annual health checkups or a procedure to determine the cause of heartburn, chest pain or upper abdominal pain. Some people do not experience any signs or symptoms that disturb daily life, thus no treatment is required. However, medical advices must be strictly followed. The most common symptom of diaphragmatic hernias is heartburn which gets worse when bending over or lying down. Other symptoms are regurgitation of food or liquids into the mouth, backflow of stomach acid into the esophagus (acid reflux), hiccup after meals, sore throat and hoarseness. Non-specific symptoms might include shortness of breath, chronic cough, difficulty swallowing, chest or abdominal pain. Differential diagnosis must be made as soon as possible in order to receive appropriate treatments in time.

In an early stage with small hernias, first-line treatments include medications and lifestyle modifications under close monitoring from the specialists.

Medications to alleviate symptoms include

Surgery is generally required if there is no sufficient responses derived from medications and lifestyle modifications. Surgery is highly recommended in patients with severe complications. During the conventional surgery to repair diaphragmatic hernias, the procedure involves making an open cut in the abdomen, pulling the stomach down into the abdomen, making the opening in the diaphragm smaller, reconstructing an esophageal sphincter and removing the hernia sac. Large incision required in this open surgery substantially leads to more pain with longer recovery time.

Due to the advancements in laparoscopic technique, laparoscopic surgery significantly helps enhancing surgical accuracy and safety. During this minimally invasive procedure, instead of making an open cut, the surgeon operates through small incisions in the abdomen. A small tube attached with a tiny camera (laparoscope) is inserted into one incision. Guided by this camera, the surgeon then inserts tiny instruments through other incisions to reconstruct an esophageal sphincter and repair hernias. To enhance the strength of muscles in the abdominal wall especially if the opening is big, synthetic mesh will be implanted to provide additional support to weakened areas. The majority of surgical mesh devices currently available for use are constructed from safe synthetic materials. Not only reducing the tenderness and pain after surgery, but mesh repair done by highly experienced surgeons also significantly helps minimizing the chance of hernia recurrence. Since the surgical incisions are only  5-10 mm. long, it subsequently results in minimized pain and shorter hospital stay with faster recovery time and a quick return to daily activities.

To achieve the best possible outcomes of diaphragmatic hernia surgery, the expert of surgeons in laparoscopic technique plays a crucial role since the procedure involves blood vessels and a number of small nerves in the abdominal and chest cavities. Due to the advancements in laparoscopic instrument with 4K Ultra High Definition, it enables surgeons to clearly visualize the surgical field in the abdominal cavity including internal organs, blood vessels and nerves. As a consequence, it helps enhancing surgical accuracy and safety. Superior advantages include smaller incisions, less pain, less blood loss and reduced post-operative complications as well as a faster recovery time and a quicker return to normal activities.

Causes of diaphragmatic hernias cannot be identified. If it is left untreated, it might lead to other health-related conditions including frequent or constant acid reflux can lead to gastroesophageal reflux disease (GERD), esophagitis (an inflammation or irritation of the esophagus), esophageal stricture (a narrowing or tightening of the esophagus) and esophageal cancer. Knowing warning signs of hernias and being aware of them are essential. If suspected signs and symptoms are presented, early diagnosis and timely treatment must be provided as soon as possible.