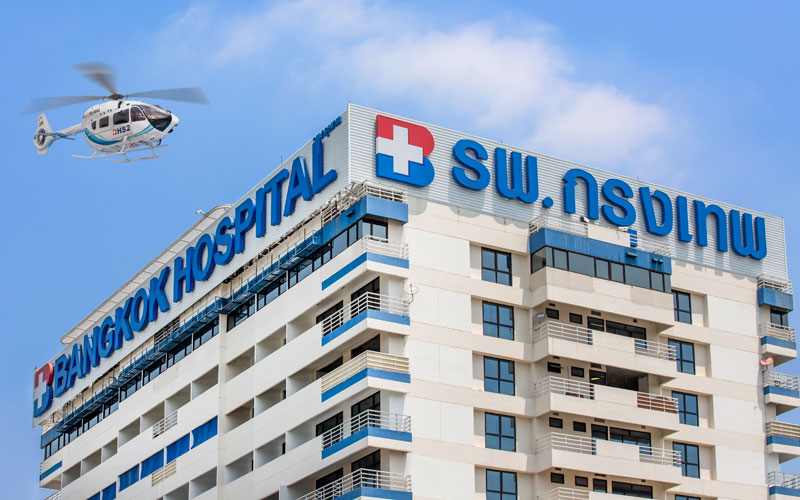 Dr. Suthorn has his eye on global standards.The group’s nine hospitals in Thailand and Cambodia are included in the network, which has an international BDMS alarm Centre, the country’s first full-scale emergency call Centre.
The nine hospitals are:

BDMS has the Prasarttong-Osoth family, which owns Bangkok Airways, as its major shareholder.
Suthorn Bavonratanavech, chief of the orthopedic and trauma care network and chief of faculty at the Bangkok Orthopedic Center of Excellence, said the group began upgrading the nine hospitals into centres of excellence two
years ago, with a focus on high-level medical standards and specialties in five specific areas: trauma, orthopedics, cancer, cardiology and neurology.

The Public Health Ministry reports that cancer is the number one killer in the country, while road accidents top the list of emergency cases resulting in a high rate of deaths. Heart disease has the highest risk of death, while
neurological disorders are the most complex and require the highest level of expertise in medical care.

” These are the nation’s biggest health problems, causing the most deaths among Thais” Dr Suthorn said. “Our nine hospitals are now moving to focus on trauma treatment with international standards.”

The Word Health Organization (WHO) reports 5,500 people die each year in motorcycle accidents in Thailand — the highest rate in the world. The WHO had earlier ranked Thailand the second-most dangerous country in the world
for road accident deaths, trailing Libya.

To increase the scope of emergency treatment, BDMS recently brought a second helicopter to serve emergency cases in Thailand and neighbouring countries.

At the new Trauma Centre, Bangkok Hospital Chiang Mai is set to serve patients in northern and southern China. Bangkok Hospital Udon Thani will serve the Northeast and Laos while Royal Phnom Penh Hospital will focus on
the Cambodian market.

Dr Suthorn said the center of excellence and trauma Centre will further help strengthen expertise in the five critical health areas. The group has developed a quality of healthcare that meets international standards such as Joint
Commission International accreditation, the Clinical Care Program Certification and the Commission on Accreditation of Medical Transport Systems.

Medical treatment in Thailand is, on average, 50% cheaper than in Hong Kong, 30% lower than in Singapore and 20% higher than in India. BDMS hopes its cost competitiveness will enable it to become a regional medical
care and emergency treatment hub.
” We believe more foreigners and locals will consider getting treatment in Thailand because of competitive prices”  Dr Suthorn said. BDMS’s network covers 45 hospitals across Thailand and neighbouring countries.