Gallstones are hardened deposits of digestive fluid mainly made of cholesterol which is formed in the gallbladder. The prevalence of gallstones is approximately 10-15% in general population. Due to some particular risk factors such as hypercholesterolemia (high level of blood cholesterol), taking medications that contain estrogen such as oral contraceptives or hormone replacement therapy and having had several children, women age over 40 have greater risk to develop gallstones.

Gallstones could be accidentally found during annual checkups. It is usually overlooked especially in working ages which time constrains and lack of awareness are the main reasons of ignorance. If gallstones lodge in a bile duct and cause a blockage, it eventually results in bile duct inflammation and infection, pancreatitis or cholecystitis (an inflammation of gallbladder). Acute cholecystitis is an emergency condition that usually happens in 20% of patients with untreated gallstones. If acute cholecystitis remains untreated, it might lead to life-threatening conditions such as sepsis and gallbladder rupture.

Cholecystitis occurs due to the inflammation of gallbladder which can be caused by 2 main conditions:

Signs and symptoms of acute cholecystitis include severe and sudden pain in the upper right or center abdomen, especially when breathing in and out. In severe cases, aggravated symptoms are jaundice presented with a yellow tinge to the skin and whites of the eyes and dark urine, pale stool due to lack of bile salt released into the stool but accumulated in blood. In case of gallbladder ruptures, patient might manifest high fever with chills, nausea and vomiting, pain that spreads to the right shoulder or back and tenderness over the abdomen when it is touched. These symptoms are serious and immediate medical attention is highly needed. 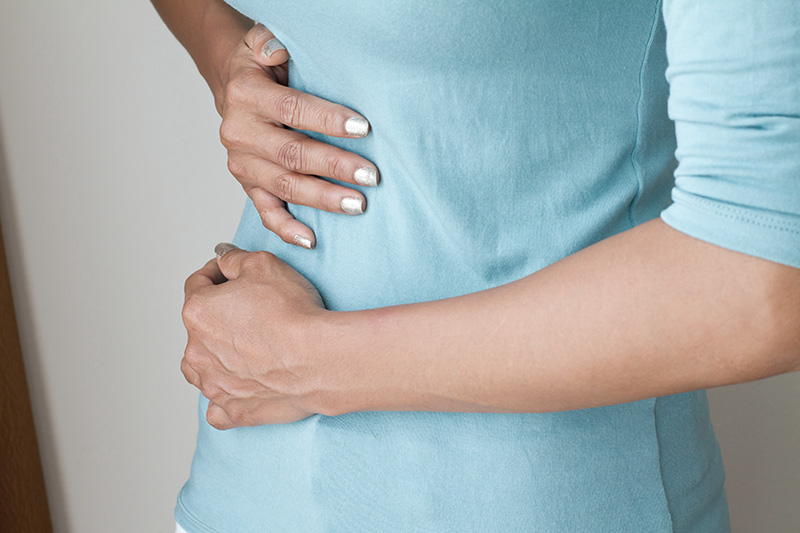 Tests and procedures used to diagnose cholecystitis include blood tests to identify signs of gallbladder infection and radiological imaging tests such as upper abdominal ultrasound, endoscopic ultrasound, or a computerized tomography (CT) scan to reveal images of gallbladder. Imaging tests help to differentiate other related conditions such as peptic ulcers and pancreatitis. If the blockage of bile duct is suspected, Magnetic Resonance Cholangiopancreatography or MRCP, advanced imaging test to visualize biliary system might be required.

Cholecystitis is normally self-limiting with a complete cure rate within 1-2 weeks. If symptoms show up within a week, gallbladder removal surgery is highly recommended. However, it cholecystitis is presented with its serious complications, antibiotics acting against infections and Percutaneous Transhepatic Biliary Drainage to open a blocked bile duct will be the treatment options. Nevertheless, treatment plan will be carefully selected by expert physicians based on disease severity, complications and patient’s conditions. In case that symptoms last longer than a week with a good response to treatment, surgery to remove gallbladder might be further advised in the next 6-12 weeks. In the contrary, if there is no or poor treatment response to given medications or presence of sepsis, abscess or gangrene of gallbladder, emergency surgery is highly required.

There are 2 main surgical techniques to remove gallbladder:

1. Open Cholecystectomy: It is conventional approach used to remove gallbladder in cases of severe infection and inflammation or ruptured gallbladder.

2. Laparoscopic Cholecystectomy: Laparoscopic surgery (laparoscopic cholecystectomy or LC) is a minimally invasive surgery to remove gallbladder which is performed by highly experienced and well-trained surgical team. The procedure involves these steps:

After procedure is completely done, the surgical incisions will be properly closed and sealed.  Due to smaller incisions, it results in less pain, fewer post-operative complications, faster recovery time and shorter hospital stay. In healthy surgical candidates, post-operation, patients can walk within 4-6 hours and average length of hospital stay is 1-2 days. Patients can return to daily life and activities even quicker.

To safely and effectively perform this minimally invasive surgery, highly experienced and well-train surgeons are vital. Supported by advancements in laparoscopic surgery, three-dimensional (3D) HD vision system and 4K ultra-high definition substantially provide detailed images of gallbladder and surrounding organs in all dimensions. This surgical technology largely help improving surgical performance, accuracy as well as safety. Since removal of gallbladder attached with liver may increase risks of gallbladder ruptures which could cause other complications to surrounding organs such as liver, intestine or bile duct.

Before surgery begins, all information of medical history must be provided to physicians including the use of some medications that might affect blood loss during surgery such as anti-platelet drugs, anticoagulant drugs or Nonsteroidal Anti-inflammatory Drugs (NSAIDs)

After gallbladder removal surgery, patients can return to their normal daily life. Patients do not have to be concerned about their digestive functions since gallbladder only holds bile acid and it is not essential to healthy digestion. Minor symptoms may include bloating or diarrhea which normally gets better 2-3 months after operation. However, to enhance the digestive health and avoid abdominal bloating, the consumption of high fat diets must be controlled with the proper amount of vegetables, fruits and easy-to-digest foods such as fish.

Although cholecystectomy cannot be prevented, gallstone as  main cause of cholecystectomy can be prevented. To stay away from gallstones, lifestyle modifications include reduced consumption of fatty meals, regular exercise, avoid rapid weight loss, restricted use of hormonal medications and having regular checkups. Being aware of signs and symptoms of gallstones largely helps to detect gallstones at its earliest stage. If there is the presence of suspected symptoms including severe abdominal pain, bloating after having fatty meals and impaired digestive function, medical attention must be sought as soon as possible. More importantly, to achieve the best possible treatment outcomes, laparoscopic cholecystectomy should be performed by experienced and skilled surgeons supported by full post-operative rehabilitation program. Taking into our consideration of patient’s quality of life, patients can rest assured that they always receive effective, appropriate and timely treatment.